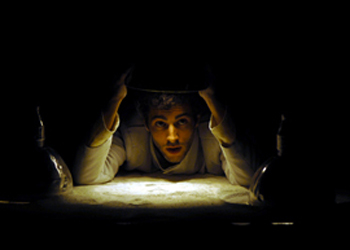 recommended by the jury at the tuttoteatro.com “Dante Cappelletti” 2007 award

A man opens his eyes. He looks around. There’s small light, he can’t understand where he is. He crosses the space, counts his steps, approaches a wall, looking for any sound. He puts his ear on the wall. Lights explode, wall turns into heaps of mud and the man throws himself on the ground, between the comrades’s cries and the bullets’s hisses. He starts again to remember. The world around is like a fence made of incomprehensible shapes. The rules that control reality are unknown. Space and time don’t flow anymore along predictable paths. Remembrances arrive suddenly, and suddenly they disappear. Alone, he has to fight, to put the pieces back together.

Lev starts from silence, but it’s full of stories; it looks like a loss, but it’s a fight, a research, an adventure: a travel to come back home.
We created a pièce based upon the gaze of Lev Zasetsky, patient of Alexander Lurja, renowned russian neuropsychiatrist.
We discovered among the pages of Lev’s diary a vertigo that talked about us and how we feel today. We’ve worked for a whole year trying to be closer as possible to this mistery that fascinates us. A mistery that appears on the surface, at intervals, that doesn’t last long and suddenly disappears.
Elusive, it gives in for a second and asks for constant attention, in order not to waste it.
While we were working we continuosly asked ourselves: what is our relationship with the story of a russian soldier who, after having his head being hit by a bullet, loses the ability to remember? Why do we want to tell this story, what do we want to save of it and what is necessary to forget about it? Why we keep on reading again and again the pages of a diary that talks about a whole life spent in fighting in order to build up again an identity, a life?
Lev’s diary begins in 1943 with these words:
People do big thoughts. Toughts rise above our heads; imagine higher buildings, faster planes, more and more immediate communications. People talk about cosmos and cosmic spaces. And our earth is a little particle of this infinite universe. But people don’t think about earth, think about and dream of travels on planets. People take for granted the flight of bullets and bombs that destroy buildings, whole cities, killing people and entire families, poisoning and burning the brain of a man, mutilating his memory, his sight, his hearing, his conscience.
And ends in 1958 with these:
Yes, war, how many disasters brought to humanity, how many deads provoked how many people maimed, how many persons crucified on a bed. But in the next future flights to outer space will begin, first of all, trips to the moon and on the nearer planets. These flights will give us more possibilities to make new discoveries and to enrich ourselves of new substances and elements not spread on earth.
In between a whole life spent in the struggle against an illness that, Lev didn’t know this, couldn’t get any better. Thirty years trying to reassemble, piece after piece, an identity, a past, a present.
We want to talk about this struggle, that can’t be anything but optimist.
And find in it the main constitutive feature of our being humans.
Riccardo Fazi
PHOTO
VIDEO

Lev from Muta Imago on Vimeo.