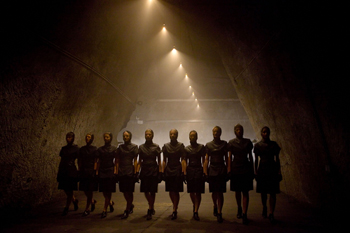 This performance has been the first step we want to take inside the underground cities of the world. It was produced by Napoli Teatro Festival Italia 2009 and took place in june 2009 inside one of the biggest cavities under the city of Naples. The project contemplates the creation of site-specific performances inside the spaces of the particular underground world of every city that wants to host us. This world can have any shape, in relationship with the history and the characteristics of the city above: former subway tunnels, caves, old acqueducts, basements, refuges, shelters from the II World War, caves of tuff, cisterns. The performance will be totally peculiar to the city, everytime different, composed of different elements anytime. Only one element will remain the same: the work on the rythm, since the them of the performance is the city itself, heard from below, from its dark mirror; the aim is to catch the essence of the rythm of the city above and re-create it below the surface. What follows are some project notes about Napoli.

We start from an empty space, where it seems there’s nothing but echo. And we end up in the mouth of a Vulcano. A lonely figure walks, alone, comes by, from far away, preceded by the sound of its own steps. It crosses the space, from one side to the other. It looks like one, but they’re two. Then another one comes, and it’s three. Four, five, six. A suspended horizon is created made of repeated gestures, junctions and meetings. And so on, until the space is full of people moving around, that push and press; until the geometry of the objective shapes is transformed into a trajectography, into a fluxus of pure movement that accelerates, always a little bit more, toward an explosive destiny. A slow accomulation, a growth, a preparation towards a cathartic explosion. A below that pushes upwards. One drop after the other, until the jar overflows. A boiling vulcano. The undergrounds. A pulse. A coming dance. Women. A body that becomes a hundred. A hundred bodies making a thousand shadows. Gestures made for the first time. The echo of gestures that bounces and resounds. To fill the undergrounds. To make the walls shake. To make the stones roll. To frighten the children. To shout the joy of those who have loved and lost, all of them, guilty and innocent, tired of being forgotten, with their strenght and violence, their pains and their screams.
In these deep and obscure spaces a faraway echo arrives. Here the memory of the city above exudes and dips: the multiple times of the human experience join the gelogical and immemorial time of the water and the tuff. Down here, forty meters below noise and life, in these enormous, dark hollows, empty and silent mirrors of the world up on the surface, you have the true feeling of facing ruins. These ruins are anyone’s memory. They’re the memory of a whole community: they appear to those who pass through in the form of a forgotten past, a past out of mind, that still can say something. A past of beauty, increasingly far, dim, unreachable. We move inside this space, we ourselves ruins of people that once has been; and we seek and seek, until we forget everything at all.
Riccardo Fazi