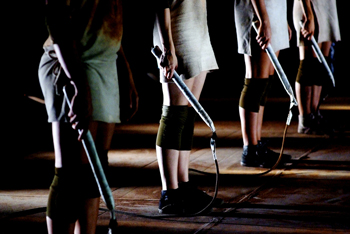 Sometimes I think it would be better just the ancient, senseless, animal pureness.
Sylvia Plath, Diaries

Displace # 1 La Rabbia Rossa has been the first manifestation of the bigger project Displace. It’s a 38 minutes performance whose dramaturgy develops solely from the perfomers’ movements and the lights acting onto them.
La Rabbia Rossa represents our struggle to stage an immediate feeling, an instinctive, primitive and irrational reaction facing a world and its collapse; a reaction that needs to happen soon, before it consumes itself, that asks to be given back in the most direct and sincere manner, without any construction or embellishment of sort.

The space is dark, of undefinite dimensions. One figure moves inside it. Behind it the echo of others, getting stronger and stronger as long as time passes. Their walking, forced and guided by directions of light in continuous shifting. Borders, boundaries, thresholds: geometries that outline roads and transmit a forced movement apparently meaningless. In this deeply empty and desolate space, just earth, iron and dust on the ground, the figures are surrounded only by themselves and by the sounds they produce moving: blocked inside a present made of nothing, between a past they don’t own anymore and a future that don’t even try to imagine. Then, slowly, a fight, a resurrection. A battle against lights and sound, a resurrection from darkness and isolation. In order to riappropriate themselves of a body, of a face that could be glorious and beating, rised, resurrected and alive.
There’s a wonderful book by M. P. Shiel, called The Purple Cloud. It was written in 1901 and tells the story of the last man on earth after a great disaster that cancelled the human race. We see this man wondering in an empty world made of empty cities and roads. Suddenly, by the middle of the book, the man starts to destroy everything he meets: all the ruins left by the human race. He sets on fire all the cities he meets during his wandering. So to reaffirm his being alive and unique in a world of tragic loneliness and silence.
With this performance we want to investigate this feeling of rage that emerges after we’ve lost all that we owned. Because inside of us a cold star burns and memory is not only a comfortable place. And we’re not only a beam of memories and dreams. We’re a bundle of flesh that urges to move and shout. And the color is that of the rage, of the sun and of the blood, and the sweat is covered with dust. The mental disposition is everything. We have to be suns in order to create worlds. But we have to be suns also to destroy them.
PHOTO
VIDEO
CALENDAR
Load More
PRESS