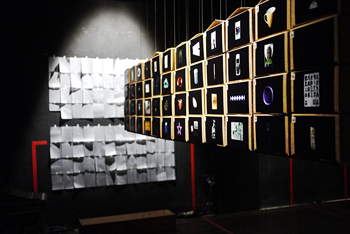 Art you lost? raises from the desire to investigate the usual role of the spectator. By the means of imagining and building mechanisms that push the authorial position to be more shared and enlarged as possible, it transforms the spectator into the author of a collective opera.
Art you lost? begins with a public call which invites people to participate to the first part of the project, the preparatory. The call includes the first rules to participate to the project together with technical informations and a request for access: bring with you an object which is meaningful to you. Something you are ready to let go forever.

The preparatory
The people who answers the call will participate to a private and individual path. Along the path they will find several stations where to leave behind themselves, more or less consciously, personal traces of their present and past lives, answering to precise written and audible instructions. Each one of the stations hosts a particular device that gives the possibility to each participant to leave his or her own performative traces: a camera to make pictures, pens and papers to write stories, earphones to listen to music, and so on. The walk-through allows a progressive path of personal enquiry: it moves from being a simple deposit of immediate informations (photographic self-portraits, transcriptions of the last sms sent) to requiring a more intimate and shared participation (phone-told stories of loss, images of adolescence, written stories about the abandoned objects). These written, oral and iconographic traces will become the materials that will be used to build the OPERA, the second part of the project.The opera collects, processes and composes together all the traces emerged from the preparatory without manipulating or betraying them. Pictures, drawings, vocal and sound recordings, written stories are all installed in the architecture that will host the project, be it a public square, a school, a theatre or a library. With the aim of weaving everytime a specific relationship with the place, the spaces are transformed in order to realize a map of memories and individual signs, which could be private and public at the same time.In the preparatory the path is simple, intimate and singular, in the OPERA, the space is open, crossed and shared.
In the preparatory the path is simple, intimate and singular, in the OPERA, the space is open, crossed and shared. The architecture of the place becomes the support of the opera itself, integrating and relaunching the people’s traces in itself and hosting the public withous any limit of time or any perspective in the glance, like in a synchronic cycle.

Art you lost? on the occasion of the opening and the closing evenings of the installation opens itself to performative events of visual artists, coreograhpers, dancers, musicians and sound directors. The performative implication is based on the research of a possible organic unity of sense and aesthetic between objects until now independent and separated. The artists that have been involved in the first two editions in Rome, at Teatro India were: MK, Masbedo, MP5, Sonus Loci, Quiet ensemble, Tagliarini-Deflorian Piseddu, Santoro-Tilli, Chiara Fazi, Gianluca Ruggeri.

Art you lost? was originally conceived for the spaces of Teatro India, a former industrial building, ex – Mira Lanza Factory, and built around the specific theme of loss. But the real nature of the project is to change and strongly relate itself to the contexts that will host it. In any met landscape, the aim is to structure a specific relationship with the architectures of the specific place and with the desires, the fears and the dreams of the people who inhabits it. Any eventual new theme to work on and new place to fill, will modulate the possible declinations of the work practices and the particular shapes that the Opera will get in the end.

July 2013
Art you lost? is present in a biennal shape at the Santarcangelo International Festival of the Arts 2013-2014: in 2013 the traces will be collected and then, in 2014 the Opera will be realized, this time in an open, public space. The traces will be collected on 2013 at the Pascucci Elementary School of Santarcangelo, that looks out over the square, in the town centre, while in 2014 all the objects, the memories and the glances of the authors will be elaborated in a huge opera that will become an imaginative and emotional archeology of the village and its time.