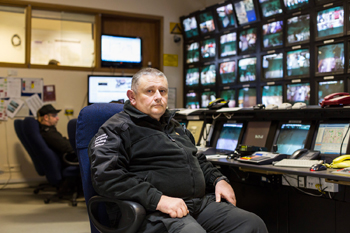 Polices! is halfway between a diary, an archive and a documentary.
A set of materials of different nature and provenance that talks about the French police (public records of trials, law enforcements reports, fragments of demonstrations, mail exchanges, phone calls) collected and put together by the author in order to raise some important issues: what does justice means today, in which relationship law, control and individual freedom are.
We provoked these materials, we went looking for the original traces that produced them, attracted by the poetic and sound dimension that this universe could offer; we tried to give back a voice, a single one, to a multitude of worlds, people, stories. We tried as much as we could to stay close to reality, to its unstable and complex movement.

When Short Theatre Festival asked us to stage this text we asked ourselves: why us? Why should we do it? But it’s been perfetly clear after the very first reading.
First of all, there was the language: we were confronting a dramaturgy built on real materials, taken directly from reality. A written composition that tried to build a tale developing from sums, juxtapositions, references, spanning through materials from different spaces and times.
Sonia Chiambretto’s text moves on a very interesting dialectics between reality and fiction, through an accurate work of selection and recomposition of the original material (presented as true and real) whose origin we’ve lost the traces. The text builds a fictional story starting from real documentary material: a non-linear dramaturgy that spans through times and places in order to confront in the most accurate way a particular issue: that of the history of french police, in all its complexity.
These dramaturgical way to compose texts out of documentary material is a practice we’ve been devloping and investigating in our research lately: and also in this case we decided this was a topic interesting to explore.
We went searching for the original traces from which the text developed; we asked the author to send us the links to the original materials from which the dramaturgy started, in order to be closest as possible to the “real” from which the fiction developed: video and television footage, mail exchanges, interviews, trial documents. We’ve listened to them, we went through the reality of sounds and situations.
To go back to the original materials was important for us in order to enter in a deep relationship with the themes addressed by Sonia Chiambretto’s text; themes that represent the second reason of interest regards Polices!
To work starting from these materials allowed us not to superimpose our point of view to that of the author, allowing us to present and structure our glance in relationship with hers, but on a parallel and different way. Listening to these traces we realized that under the tale of the different practices of the french police (conscious of the differences between the italian and the french police) lied a much bigger question that today talks to all of us: we decided to focus on this matter. It’s the matter of the relationship between control and security. In which relation are they today?
Where is the limit between deprivation of liberty and acquisition of a higher level of security on a collective and personal level? What are we willing to renounce in order to fell safe in our cities? Are we really sure to know what this liberty is, this liberty we’re so ashamed to lose? What liberty we’re talking about?
It’s almost two years now we’ve been living between Rome and Bruxelles and it’s evident that the world around us is changing. The “security” controls in any context of our lives are more and more, but the menace around us is narrated by the media and felt by us as closer and closer. We pretend “security” but at the same time we’re ashamed at the idea of paying this safeness with our liberty. What is the police and which is its role in this situation is a complex and intricate question, and for this reason we decided to approach this text as it was an investigation. We decided to “read” the text, to boserve it, in order to understand where it could lead us. Monica Demuru, a straordinary performer, alone on stage, test the words Chiambretto’s words: she makes them resonate, she provokes them, she gets in and out of them. Together with her we try to understand, aside from where is Right and where is Wrong (the title of one of the text’s chapter) were do we stand in relation to all this.
PHOTO
VIDEO
CALENDAR
Load More
PRESS
“A Poliphony of elements, images, videos, lights, precisely and harmonically organized inside a broken chronology.”
Giulia Sanzone, Repubblica.it

“An euphoric violence that unfolds in front of us with a placid, disarming and persistent inhumanity.”
Nicole Jallin, quartaparete

“The theme of Justice is confronted with an immersive and completely innovative language.”
Cecilia Spano, Carla de Gasperis, Saltinaria