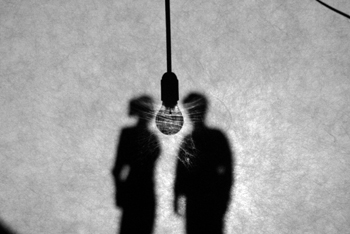 Plinio the Elder tells that painting was born when a girl transfered the outline of the shadow of his young lover on her room’s wall. The man had to leave the morning after, and so the night before, holding a lantern close to her lover’s face, and noticing the projected shadow on the wall, she drawn the outlines of his shadow.
Maybe this story doesn’t keep on the way Plinio the elder narrates, with the young girl’s father who realizes a portrait made of clay starting from the drawing on the wall made by his daughter (in this way giving birth to sculpture, Plinio tells us).
Maybe this story continues starting from the young girl’s gesture, who tries to hold on to something that slips away, that cannot be firmly held. Just like when an object falls down and we’re almost grasping it, our hand grazes it for a second, but we miss it, and in the end, the object hits the ground.

Orpheus is climbing up a long, silent, narrow, dark path. Eurydice is following him, because he enchanted everyone down there, in the death’s realm, and he managed to obtain the gift of having back his bride. The two walk, he preceedes her, but he knows he can’t look at her until they are back in the upper world, this is the deal. She humbly follows him, some steps back.
But Orpheus turns his head, she falls back, stretches out her hands, tries to hug him, but she doesn’t grasp anything beside the insubstantial air. Eurydice turns again into a shadow, a body without weight, maybe the remnant of what she has been on earth.
These two different gestures are born from the same necessity, but there’s no consolation in any of them. The image that remains on the wall doesn’t offer any rest when the body that had generated it is missing. The shadow had translated his face on the wall, but the shadow is false, it cheats and confuses. Eurydice embraces the air, sways her hands that in the end, close upon themselves. She also wants to hold back, grasp, stop, but her movement doesn’t find a body, she keeps on reeling the arms around emptiness, failing in reaching something that could stop her searching.
These gestures talk about the eternal search for an absence and the attempt to draw a border that could ratify a presence.
Claudia Sorace