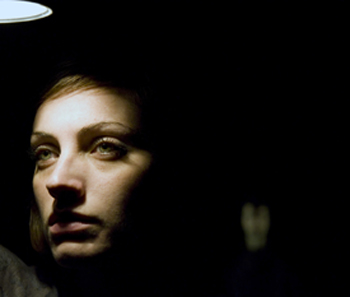 Madeleine is the story of a wait. Of a slow sighting. An approaching, an unstoppable countdown, an inexorable descent toward a manifested destiny. Lev was the story of a man who strives to come back home. In Madeleine a woman waits for a return. She doesn’t know if and how it will happen, she doesn’t know when. But she knows it will happen, that it will be unpredictable, devastating, destroying: it will make explode anything she could have built before.

Everything at the beginning looks serene, secure, protected: the woman, alone, inhabits a tranquil and definite place. The gestures are essentials, the faint movements remain suspended in air. The space is still, precisely outlined, the lines that pass through it draw precise courses and paths. But slowly, in an implacable way, a strange spell settles down on things, like a vertigo that moves what shouldn’t be moved: small, contradictory signals appear between the folds of reality: a gust of wind, the sudden passage of a shadow, a light that moves or suddenly turns off. The woman tries to defend herself, striving to get hold of reality. An atmosphere of strange electricity fills the stage. The woman realizes that soon she won’t be alone anymore.
Dream and fear are the constitutive elements of Madeleine’s world. Together with the performers. Together with a scenography made of thresholds, projections, trickeries, transparencies, reflections. Together with fog, smoke and wind. Because we feel invaded. We feel under siege. We feel that something terrible is going to happen and we don’t know how to react and so we close ourselves in our paper houses, hoping they will endure the impact. We’re scared. We try to ignore the signals, we diminish our own feelings. The past, we’d rather forget; the future, we can’t think about it, too worried to preserve a present constantly under menace. We fear the loss, the abandonment, the real exuberance, the extreme and obscure passions; we’re shocked by the complete embrace of a movement which is not direct, but spiral, concentric, feminine. Maybe only dream remains that mythical territory that is always been: the place where barriers fall down, where anything far meets, against our willness, where directions remain unpredictable: this place we would like to investigate. This state of waiting we want to experience. Of this useless fight to resist and of the latter defeit we would like to talk about. Because the storm will not wait anymore: suddenly it comes, twists and drags. It seems to separate, but it really joins. It seems to destroy, but it deprives of the superfluous, uncovers, reveals, and with its passage leaves spreaded fragments of pure truth.

Madeleine from Muta Imago on Vimeo.