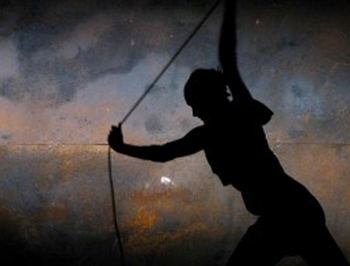 Displace (v.tr.): move or shift from the usual position or place, in particular, drive out from homeland.
A desert. The meteorized crust of a planet. A desolate place, without dimensions or time.
In this place, a woman. Her voice, and her chant.
Behind her, in the dark, the impression of a movement, the air stirred by the breath of an enormous matter: fragments of rock, craters appear, dusty ways that here and there fold on themselves and finally collapse again into the darkness.
The woman’s singing fills the air and at the same time the huge surface closing the space behind her shows itself, slowly declaring its real nature. A wall which is memory, and already a ruin, that retains on its surface the signs of what has been and is not anymore, of what could have been, and won’t be.
A deposit of time that comes to life, breaths, dilates, beats.
The chant becomes a cry.
The breath becomes a stroke.
A sudden collapse.

Around us today constructions and thoughts quickly turn into their own ruins, without anything that could replace them.
From the very center of this crumbling we have decided to cry out: a cry for all that we have lost, a cry to the roads we are about to walk along and the distances we’ll have to cover. A cry that is a lament, an elegy; a cry that desperately tries to create a new break, a temporary oblivion of present and past times, a place to rest between remembering and waiting, a place we could name as bliss, as possibility. As a last and desperate assault, facing the collapse.
A collapse that inevitably happens, having been expected for a very long time. And that only leaves us a road to walk on, the sound of steps, the distances to cover, and faces of all the persons supposed to pass through it.

Displace is the story of a woman, a lone survivor whose adventure reverberates into the narration of a whole nation’s destiny. Alone on stage, the woman multiplies herself and becomes people: her adventure and her own pain re-echo into the bodies and images of a war and of a land where nothing remains but ruins, debris, mud and sweat. It’s like in Euripide’s Trojans Women, the main source of the project: Troy has gone to ruins and on Ecuba and her companions hangs the trauma of loss and uprooting: the displacement, the feeling from which our project arises. Women who have lost all that they owned and who find themselves on a desert beach, fighting to rise up again.

Displace is the story of a flight, a struggle, and so of a possible resurrection: it’s the path, the road to walk on until its end. In order to understand if it’s right to fight to save the little that remains, or if it’s otherwise better to destroy it once and for all, and forget, so that from the ashes new possibilities could finally arise.

Displace is born after two years of work on thematic and scenical materials that brought to the realization of two previous performances: Displace # 1 La Rabbia Rossa (premiere october 2010, RomaEuropa Festival, Rome) and Displace # 2 Rovine (premiere june 2011, Festival delle Colline Torinesi, Turin).
It’s a tragedy in three acts, an epic tale into which all the different elements produced before for the first time find a complete and unique meaning.